As the year draws finally to a close today on New Year’s Eve, I reflect on the year that was. Many lament this disastrous 2016 as the worst year in a long time because of outrageous political events such as the Syrian refugee crisis, police killings spurring the “Black Lives Matters” movement, the roughshod Dakota Pipeline, and the disastrous rise of the tyrant-imbecile Donald Trump; as well as the spate of deaths in the arts: David Bowie, Prince, and Carrie Fischer.

Closer to home, many of my friends suffer from the long collapse of relationships, leaving me bereft of role models for togetherness. Furthermore, jobs remain tenuous; my company did lay off a cohort, including friend Tom. San Francisco heaves from crowds, ratcheting prices, and growing income disparity. It’s been a tough year for the world.

Yet, in spite of the calamity around me, 2016 treated me well. My collapse was years ago in 2013 and 2014. I rebuilt last year and stayed a smooth but intense course this year. I may not have faced great life changes in career, housing, or relationships, but I did harvest the struggle I had put in previously to get where I am now. Still, 2016 was hardly relaxing or complacent. I rarely had a moment to breathe.

This was the first full year at my new job. I finally got the hang of my position as a software engineer and data scientist. I’m known for the algorithms that power our internal applications, regular collection of company data, and pretty graphs. I’ve become a social organizer who contributes to the office’s culture, makes people at work feel more at home, and an instigator of after-work outings. I took our group to the beach for an evening bonfire and brought coworkers to the Exploratorium. I still find my clothes the dried beans of the Exploratorium’s tactile dome.

Despite saying, “this is my last art project,” I built a lot this year. 2016 commenced with the demise of the Sphere project. I couldn’t get the sphere’s plastic arcs to stand up strongly in my kitchen, so I learned ruefully that not all projects succeed. I regrouped after the Sphere’s failure to work on two simpler LED installations: the linear Eels in summer and Squares this fall. The Exploratorium called me back in late November for a two-month installation of The Squares. I’d like to do a third piece for them (Spheres II) at the end of next year. I made another dinosaur outfit called The Triceratops, built three sets of light-up antlers, and fixed much that had broken. I’m sad the Triangles got ravaged in my absence on the Playa for Burning Man. I’ll be fixing them for much of the upcoming winter.

2016 was meant to be the year of the Body, my body. I did sign up with a chiropractor at the beginning of the year and stayed for 24 weeks of intensive bending and stretching. I feel more upright at the close of this year, but as progress is so gradual, it is hard to tell how straight I stand. At the company’s Tuesday and Thursday yoga classes, I upward and downward dogged with teacher Garrick. He is the best yoga teacher I have ever had. I started running my weekly half-marathon to the ocean with someone. Most weeks, Spinach and I run, chat, and analyze as we push each other onward through life. I ran my only timed race of the year on Valentine’s Day for a slow 94 minute half-marathon through Golden Gate Park.

This year was one of assessment, organization, and paring down. Over summer, as part of the Kon-Marie method for tidying-up, I vetted all my belongings and shed one quarter of them. I feel lighter, more abundant, and aware of what I carry with me. I bought new cook pans, a vacuum cleaner, and hiking boots. After the demise of my car at the end of 2015, I planted a garden over spring in my driveway. The lettuces and strawberries grew well, but the basil, carrots, and herbs wilted.

I didn’t think I would travel widely, but I did. I visited 8 countries this year, 5 of them new to me (Slovakia, Hungary, Sweden, Belize, and Guatemala). My passport overflows with new stamps. In October, Greg and I toured five European capitals. For Christmas, my brother, Lee, and Adriene enjoyed sun and jungle in Belize and Guatemala. I flew out with John Major for Montreal’s Mutek festival in June. For the first time in a long time, I did not attend Burning Man; I didn’t miss it much.

I spent much of the year reconnecting with friends and family. Brother Ray came out to San Francisco over the summer to stay with me for the first time. I returned the visit a few weeks later to Yellow Springs, Ohio, for a horse-riding lesson with Adriene and a really fun all-day music festival. I spent the week before Thanksgiving in New York City to catch up with Bobby, David and Jeremy, and Patrick and Amanda. I cooked a 7-course Thanksgiving dinner for my parents, brothers, and nieces. Ruben and I had a lot of adventures in San Francisco, Sacramento, and even for a few April days in Austin. We stood a lot in hot lines for morning barbecue.

2016 brought fullness and richness, but fortunately neither a lot of craziness nor drama. Although I still don’t understand relationships, I continue to navigate nebulous but not fretful courses with Greg and Stephanie. I’ve been so overwhelmed over the years with break-ups that I’d rather be single instead for awhile. Overall, I did so much this year – work, art, travel, running – that I felt overwhelmed by one project after another. Although my life is full, I would like better to breathe. 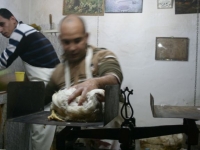