Last Sunday night, I marched down 14th St and Folsom to a music venue new to me, Slim’s, to see an early show. Ezra Furman is both a performer, once a resident of Massachusetts, and a band. I first discovered his music about five years ago when Greg dragged me across the street to one of Ezra’s shows upstairs at the Swedish-American Hall.

At the concert, I assumed the crowd at Slim’s would be a bunch of rainbow-haired queerdos. I was rather surprised that it was mostly indie bros and their dates, straight couples and the typical mix of San Francisco. We may have gotten to a cultural point in this city where a non-binary performer isn’t news. One of Ezra’s songs waxed on how he could be the best girlfriend. People may go to shows to cheer on good lyrics, catchy song hooks, and thoughtful story telling — all of which Ezra does well — and not for the politics.

Over the years, I’ve changed and become more of myself, wherever that is going. Humming on my way home from the concert, I stopped looking so much over my shoulder and instead started looked ahead. 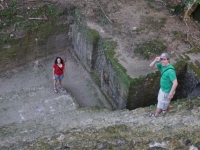