Every year in the spring, Matt Fisher and Todd Cooper host a long-weekend camping festival incongruously named Gays Hate Techno, as the attendees are not all gay – perhaps predominantly so; they actually like techno; and the music played roams challengingly from ambient to breaks to even techno. This year, I rented a U-Haul van on a Thursday night, took off my first day from work since I started, stuffed the van with four Snowflakes, two halves of a hemi-Sphere, one Small Square, and drove the one-hundred forty miles from San Francisco, during owl time no less, north and east into Lake County to a rustic cabined resort called Saratoga Springs. There I was met by five hundred queerdos, most from California, but also some friends from Boston and New York, even a Stephanie who broke the awkwardness of our separation. Mostly I just wanted some time in the woods and meadows away from work.

Over three nights and two days, I hung out, soaked in a crowded hot tub, danced to some incredible music, hiked a hill to see wildflowers among burnt branches, and reconnected with those near and far. The Gays still Hate Techno. I’m happy to say that I still can’t figure out this festival – is it a rave? a conference? a sex party? an art festival? a gathering of bears? Who are all these folks and how did they find out about this unique and strange togetherness? Unlike events like Burning Man, there are few rituals at GHT and even less woo. Find your own bliss. Stay up late or wake at dawn. Figure out what moves you.

I was surprised and thrilled at the burgeoning presence of more women and trans people. Everyone present is still figuring out their own identity, communities of friends, and what sex and gender means to them. Small tribes still gather here, like the biker bears with crocheted animal rugs on their backs of their cut-off denim vests, but it was the intersection of these disparate tribes that fascinated. In the hot tub especially swum a wide mix of temperaments and backgrounds.

Although I’m getting older, there were plenty present older than me. I do fewer drugs than I once did. The hangovers are lighter. I have too much to do to let a bender get in the way.

On Friday afternoon, Stephanie and Tom helped me set up three outdoor art projects. We hung the four Snowflakes from the balcony of the main lodge. We assembled the two Sphere halves by the creek. On Saturday, the day before Easter, I split the Sphere egg in half, exposing the interior panels. I couldn’t figure out how to mount the Small Square over the hot tub so I leaned it against the heavy things I had: a box of white wine and a twelve-pack of La Croix cans. The piece stayed upright most of Friday night but blew over Saturday, possibly because I was drinking away the ballast.

Art exhausts me with its hauling, fiddling, and repairs. The covers are now kinda wrecked and some of the electronics don’t work. Nonetheless, I got the three pieces to light up. The Sphere has a slight power drop that I may be able to fix if I tune up the power supply from 5V to 6V. The Snowflake plastic covers look far too cheap. I need to invest in sturdier acrylic protectors. The Small Square requires mounting points. I’m not sure why I go through all the trouble, but after some rest, I get up again to make improvements.

I dunno how much longer I’ll attend festivals. Nonetheless, I had some great laughs with friends, eased my way with Stephanie, got some ideas for my next projects, and learned how to fix what I have. I’m slowly making more friends and acquaintances from the weird community of the Bay Area. Mostly, I want to give back to all the incredible efforts of Matt and Todd, both of whom must really hate techno. 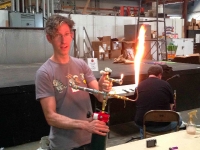