When the bagpiper blew his pipes on the terraces by the hot tub, I knew it was soon time for the Cuddlefish and the Dread Pirate Liberace to go. The bar was not yet out of alcohol, but they were through with the red Solo cups, so the bartenders were filling the few remaining styrofoam coffee cups with whiskey. At some point soon, drunken Bees and Waldos and Elvises would be sliding down the verdant hillside.

The high holy days of Halloween fall in San Francisco over a ten day period spanning the weekend before Halloween and finishing with the Day of the Dead parade through the Mission on All Souls’ Day, November 2. For this holy week, I glue a costume to myself. This year, I’m a silver cuddlefish with two tentacle hands and a hat of seven dangling LED tentacles. This silver outfit is conveniently warm and recognizable.

Hospital psychiatrist Dr. Rick Patel hosts my favorite party of the year on the top on Folsom Street in Bernal Heights at his Italian farmhouse. Although I’ve attended about ten of his parties over the decade, I have yet even to recognize the doctor. I hear he spends the night sequestered on the upper floors of his house.

I tell folks that Dr. Rick’s event is more a dinner party than an all-night bender, so arrive early. Although there are no advance tickets, the $20 donation door fee does ratchet as the evening gets longer up to possibly $100. This year, I’ve lost my former crew of those that enjoy this party, some due to lack of interest, others due to a breakup. So I invited some new people this year, Blake and The Famous Michael Sollazzo, who might enjoy such a convivial event.

Blake meets me just after six at a taqueria on 24th Street whose patrons wonder whether cuddlefish eat al pastor burritos. As the sun sets, we hustle east to Folsom and then south up the hill into Bernal Heights. Alas, a line to get in already snakes up the hill at 6:40pm, but it moves fast. We duck under cobwebs to get inside.

If Hollywood filmed a movie about a fantastical Halloween party, it would be at Dr. Ricks’s house. Two surly but eager bartenders pour free, stiff drinks in front of chicken coop. The upstairs balcony has a view of the delightful crowd below as well as the San Francisco skyline. Inside, five bands through the night play in a cramped room. A Pope jams on a guitar while Darth Vader beats a drum in the balcony window. Downstairs in the kitchen, the wine is going fast. Fire performers twirl on the ground floor deck next to the wooden build. A bagpiper roams the higher terraces.

Last year, I finally assumed that Dr. Rick just rented this set for his party, as the house is too perfect and too chaotic for actual living. Why would you let a thousand people trample all over your furniture? At one point in the evening, Blake and I duck out of the dance floor and into the second floor library to wait for the secret bathroom. In Dr. Rick’s study, looking at his diplomas, extensive library, and odd personal effects, I realize that, yes, this is indeed his house.

Blake, dressed as the Dread Pirate Liberace, hoists all night a six-pound, metal, four-candled, candelabra. He’s quite charming with the costumed crowd. I chat to former roommate Carl about fatherhood and his friend Lisa about raising a kid in San Francisco. A party of six, dressed as characters from the Princess Bride, remember me as the Pope from about ten years ago. There’s an incredibly cute Dragonslayer.

My two favorite technical costumes are naturally light-up outfits. An Australian has constructed a white pangolin hat that has trapezoidal panels that both light up and move on actuators. I’m inspired to build a similar kinetic wearable. A superhero Dr. Strange creates a spinning light show disc about two feet in front of him. The mystical patterns are mesmerizing. Blake and I meet my favorite costume, a simple one, on the top terrace. Boris, the Russian hacker, has already voted 300 times. In his Russian hat, sunglasses, and track suit, he has got down the look and patter of an unfortunate moment in US elections.

It’s past ten. I’m tipsy but fortunately not drunk. I need to get to the next event. I wish Blake a warm goodbye, trundle down the terraces and out into residential Bernal Heights. Can a cuddlefish hail a Lyft ride? Yes.

I head over to the big (gay) party at the 550 Barneveld warehouse, sponsored by Polyglamorous and Mystopia. I already spent the afternoon at the warehouse in the tiny upstairs room wallpapering every surface with lightly-adhesive brick laminate. Meanwhile, Marilyn decorated the picture window with green black-light tape to look like a church altar. Add a skeleton and lots of LED candles and you have a crypt. Later on, architect Wink lamented that crypts are not above dance floors. It could be instead either a Crypt Loft or better yet an Attic.

Todd Cooper and Matt Fisher have built in the outdoor lobby an amazing 3D black-light gallery with lots of portraits, animal heads, and special effects. We roast under heat lamps. The two main dance floors are impenetrable. I miss the Comfort + Joy colors. Major plays an inspired, chaotic set in the Crypt that feels more like an unplanned experience – a frigate on high seas – than the typical Monster Mash. My hips give out after ten hours of motion. I tell myself to keep moving through the set.

The clock hits 3am. I need to go home. Can a cuddlefish hail a Lyft ride? Yes. 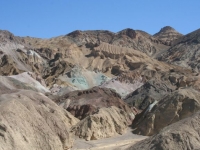