I thrashed around most of yesterday in a deep funk for my birthday. I tediously repaired six Triangles by washing their covers, sewing rent seams, repositioning LEDs, and laboriously putting back together the lights, covers, and frames. Fortunately, all six Triangles still work.

Unfortunately, frustrating busy work in my backyard wasn’t exactly how I wanted to spend my birthday. However, given my month-long depression, I leaned in to the gloom perversely to savor the loneliness. I almost sent out word to cancel the upcoming small evening celebration, as I barely could speak to anyone. Nonetheless, a birthday party is not necessarily for the celebrant but for those that want to show appreciation. Spinach and Stephanie would be so angry if I stayed home.

As I still had no phone, Spinach planned the evening. He met me around 7pm at an Oakland dive bar called Radio for a couple of drinks after which we sauntered into the sunset to Jack London Square and the Bay. There, we met Stephanie, Giorgio, and Adam – all fresh from work. We dined outside by a fire pit at a pizza place called Forge. The staff brought out two surprise desserts with candles and a happy birthday song. Afterwards, we had a round of Manhattans next door at a tiny, ancient shack called Heinold’s First and Last Chance Saloon, with a sloping floor and cartoonish oversized spiders. We weren’t done yet! Stephanie drove Adam and myself to Van Cleef’s to finish the night with two rounds of their signature greyhounds, squeezed from fresh grapefruits.

Over five hours, I drank a lot: a pale ale and a Negroni at Radio bar, part of a bottle of red wine at Forge, a Manhattan at Heinold’s, and two greyhounds at Van Cleef’s. Makes my head swim, but we’re drinkers.

It was a gloriously fun night with the proper mix that causes me joy: a well-planned excursion to places new to me, a small enough crowd (5) that everyone could be heard, a fantastic mix of people with entertaining stories, a chance for everyone to feel special, and overall a memorable shared adventure (plus a hangover). I couldn’t quite hold fast enough on to my gloominess. Thank you, Stephanie, Spinach, Giorgio, and Adam. 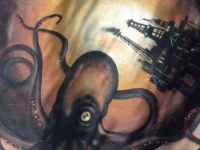