Marathon parties are trending in San Francisco. No, not parties for marathoners, but parties that go on and on and on. Honey Soundsystem threw a 13-hour party on Folsom Sunday at the end of September. I lost my phone (see above) during a 30-hour party at Public Works to celebrate that club’s eighth anniversary.

On Sunday, I attended a 12-hour party. A Berlin-based arts collective set up a space-themed event in the club The Great Northern based on the potential-habitable planet Kepler 452b. As the event outlines, “Kepler 452b is an immersive event combining art, performance, installation, fashion, music and dance party. Using the metaphor of space migration, our event will create a venue for envisioning possible futures – of openness, collective action, inclusion, self-expression and collective-individualism… Throughout the night, the event will be delineated into three chapters: launching from Earth, entering space, and finally landing on Kepler 452b.”

I did not know this event existed until the day before when alerted by the Famous Michael Sollazzo. Going out means taking chances. I know what staying in feels like. Plus, I’m not working tomorrow.

I had dinner, then hopped a Ford Bike to the Great Northern Club, a space I had not visited for three year when last it was known under a different name of Mighty. Inside, the new owners had smashed down some of the room walls, put up art deco sconces, and changed the locations of some of the bars. Drinks were still exorbitant ($7 for a PBR!) but a food vendor sold an unbelievable quesadillas for just five dollars. That quesadillas was worth getting on a rocket ship.

Berlin techno boomed relentlessly all night long at deafening volumes even with ear plugs. Thump thump thump thump. No vocals, just noise. Every hour or so, the DJ booth would switch ninety degrees causing the dancers to pivot, but the same thumping would resume.

The place never got full, but folks were friendly and fun, as we were here for the duration. Some were visiting from Berlin, others knew of the German arts collective. Upstairs, in a tiny room I did not know existed, a band set up with a bass guitarist, keyboardist, drummer, and two vocalists. I sat for tea from a samovar and ate cocoa nibs.

Downstairs, precisely on the hour (this is Germany!), dancers would concoct an interactive performance. At 8pm, six figures wearing rubber animal masks cavorted in circle, jumping on each other and into the audience. At nine, a tall barbarian in dreads and high heels twirled on a platform before collapsing in front of the DJ booth. At ten, an old Japanese woman in white face and a towering beehive hairdo arrived with a box wrapped in red ribbon. She unspooled the red ribbon through the dance floor along with many other boxes of red and white ribbons. Caught in a net, we drew together.

Just off the dance floor, airline attendants checked in revelers for upcoming excursions. Flights to the Afterlife were already sold out, but space remained for Little Death Destinations. It’s a 12-hour party; I should at least try to board a plane. A tall airline steward wanded me through the security, then had me spin a wheel that stopped on the image of an open-mouthed skull. “Almost Kissing,” he cackled.

A stewardess grabbed my hand to lead me through a maze of black curtained corridors to a tiny room with two chairs. “This is Almost Kissing. We make out, but there will be no touching. Okay?” So we proceeded to neck, then almost kiss. My big nose brushed her hair. The limitations surprisingly promoted freedom. I gave her one last almost kiss on the forehead and thanked her for a great night. Not bad for a Sunday. 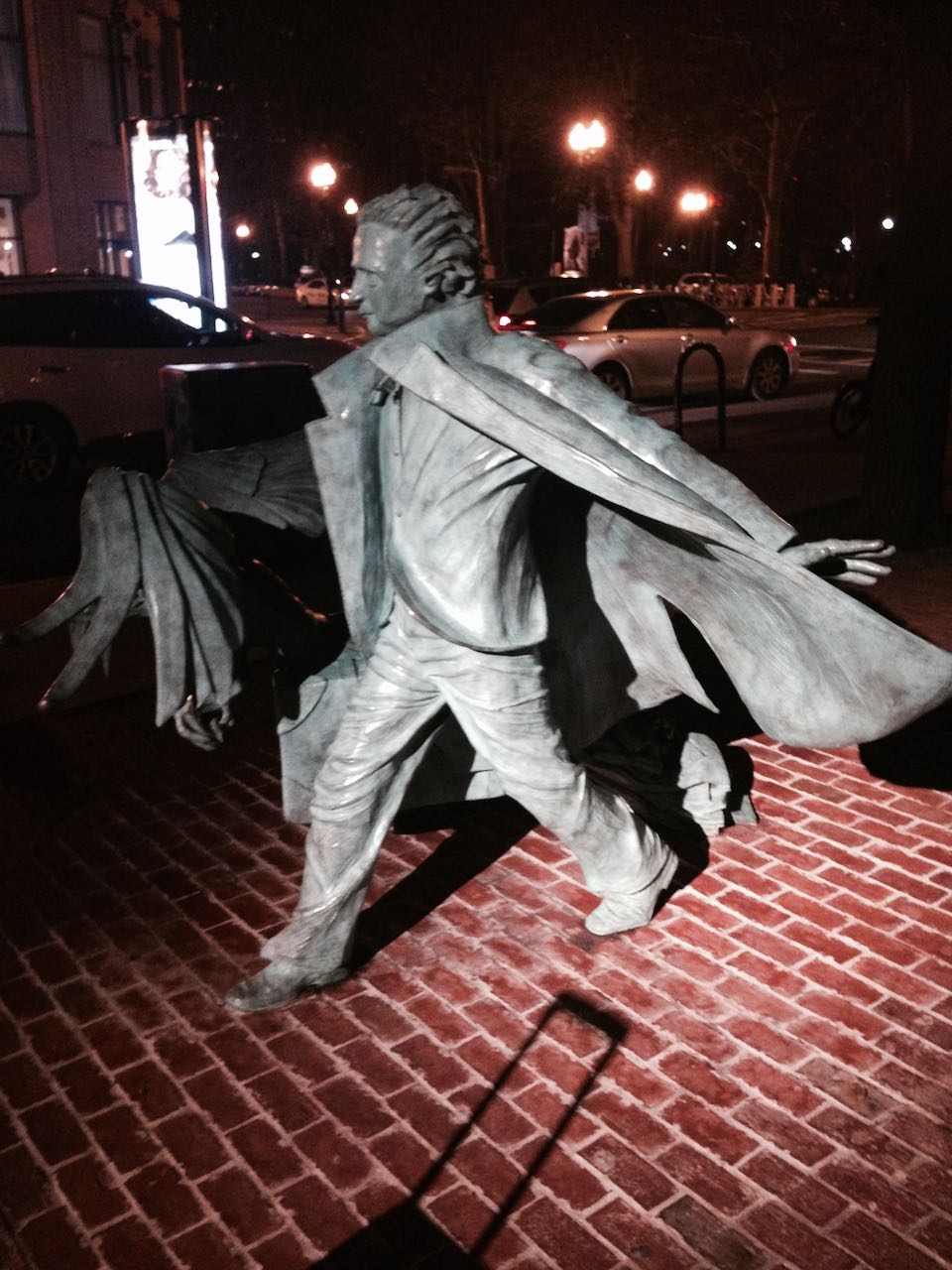