I was recently asked to teach a small craft workshop on a Saturday afternoon. As I make costumes that light up, could I teach others how to light up?

Most of my projects require weeks of tedious tinkering, cutting, soldering, and sewing – too much time for an afternoon workshop. I need to explain a simple project. I have turned a strand of Christmas lights into a rack of antlers that can be worn as a hat. The antler materials are few: battery-operated Christmas lights, 16-gauge wire, electrical tape, 24-hour epoxy, and Spackle. Trouble is, both the 24-hour epoxy and the Spackle harden overnight, requiring cure times that would be too long for an afternoon craft workshop. Furthermore, I don’t have an endless supply of Christmas lights.

I decided best to pare down the class to a small group of a dedicated few. With enough perseverance, a participant could take home a wire antler frames and finish up the rest of the antlers on his own. I brought to the workshop antlers in various stages of construction. Like on a cooking show where the raw turkey goes into one oven with a cooked turkey coming out of another, I demonstrated over an afternoon how to take antlers through the construction stages:

Cut 16-gauge wire into a bunch of pieces. Wrap the wire pieces around themselves to build an antler armature. String the Christmas lights on the armature and tape the lights down to the wire. Cover the armature with 24-hour epoxy for strength. Cover the epoxy with Spackle for proper texture and color. Sand down the Spackle layer. Attach the antlers to a hat. Ta da! Easy!

Nobody finished a set of antlers. Sadness. This workshop may have taught me the difference between east and west coast ethos. I do generalize. The East Coast, where I’m from, has brutal winters. Cold lasts for months. People can feel trapped in their homes and so develop extensive basement projects in which patience and isolation are useful. For years, I painted fantasy miniatures and wrote code in assembly. Now I spend nights after biotech work doing the same bullshit craft work over and over again: cutting out plastic cones, sewing fabric, and soldering. It’s not fun or glamorous work, but I like the flow. The climate is better in the West Coast so it is much easier just to hang out. Folks here like to perform. Drag is popular.

It is certainly easier and more relaxing to watch someone make antlers than make a set yourself. I got a couple of armatures built, but none of the epoxy applied. With so much going on in San Francisco, it can be hard to cache personal time for projects, especially projects done alone.

The workshop still was revelatory for me. I once was so protective of my “art”. Having tinkered for so long developing concepts and engineering, I oddly feared that showing another how to make a costume piece was tantamount to giving it away.

On the one hand, even with the instruction sheet, there is so much work involved that it is not worth it for most people. Many have asked if they could simply buy a set – or more likely four sets – to avoid the messiness that is tedious construction. Antlers are not going to spring up all over the city.

On the other hand, why not give it away? Why be so coy? There’s immense joy in teaching others, watching them turn an idea into their own, and having them teach another down the chain. I learned so much from artists; I have so much to pay back.

There’s also magic in having more than one of a costume piece. I have loaner antlers now for a friend! A giant new revelation for all this stuff I make is that I can bestow it on others: have other people wear light-up outfits, and spread widely and closely the specialness that comes from glowing.

A gang of antlers makes a group a recognizable set, a fraternity that is connectedness by dress. So lonely these days, I strongly desire connections. Costumes can help those who don’t normally stand out turn into rock stars. 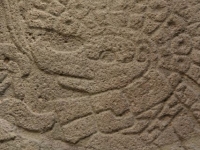