Every once in a while, I like to reconnect with an old friend: New York City. Although I have been recently swamped with a new job that miserly counts off vacation days, I nevertheless booked an early-April weekend away to Brooklyn to see whether I can balance travel and work.

I’m here to attend The Black Party, perhaps the biggest annual fetish circuit party in the world. I want to go before I never want to go. As I enter my late 40s, I’m losing the urge to be crushed in a cavern of leathermen. Still, I gotta see this dungeon in its potentially-terrible glory. I also bought a ticket for my host David to woo him out to the Bronx on a cold Saturday night.

I no longer visit New York’s tourist sites. Instead, I want to listen to the heartbeat on the city, and that thrums on the subway, at bagel shops, and along industrial streets. Getting off of my Thursday morning red-eye flight from San Francisco, culture oozes everywhere and hits me in the face . I make it to Bushwick and my host’s loft apartment before David leaves for his Dow Jones job in the financial district. Alone in the house, I nap some, do some computer work, and take an afternoon meeting call.

In the evening, couple David and Jeremy and I subway out to Greenwich Village for a small birthday party in a tiny bar called Ty’s. The 50th-birthday boy Pete tells me about his trips to South Africa. All of us watch Ru Paul’s Drag Race over beer, whiskey, and birthday cake. So many bars have wood floors and low ceilings, out of place in San Francisco.

We blow a lot of money at an exquisite, tiny Italian restaurant that features pasta. I’ve never seen pappardelle so wide. The fresh pasta brings closure to my pasta kick that started with an unexpectedly-good Italian dinner one wearisome night in Havana. With a bottle of chianti, I’m well into my cups, laying ground for Friday’s hangover.

It’s a bit odd to fly all the way east to a city as big as New York just to commune with friends, but that’s what I like to do. I catch up with Patrick and Amanda over lunch burritos. I take a couple of meeting calls in their kid Lukas’s bedroom. Patrick and I trade philosophy over a couple of beers in a dive bar, watching the Park Slope mommies stroll their strollers on by. When younger, such indolence would panic me in the face of so much possible excitement. I’m just grateful to do little, freed from my living room of electronics projects and lists of tasks. It’s Friday night. In this Bushwick apartment filled with books, Jeremy moans about work email. David has yet to come home from his Dow Jones job. We might go out. We might stay in. 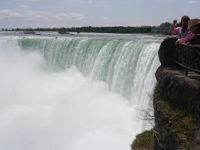