Saturday night, Public Works hosted a party called Burnal Equinox to celebrate the mid-point between the previous September’s Burning Man and upcoming Burning Man. Sounds like a silly commemoration to me, but it is an opportunity for a party near my apartment, and I have not been to tired Burning-Man event in quite a while.

Earlier that Saturday night, I ushered Spinach and Giorgio out of my apartment after a great dinner and two bottles of red wine. Departing already drunk to party may not be a good idea, but seems more like standard business practice for me. On to that alcohol fire, I threw on a small medicinal edible that on the previous weekend made me giggly during the All Worlds Fair.

Before I left the apartment, I strapped on some white Aztec Wings that make me look more like a moth, and then marched down 14th Street with a left turn on to Mission.

As the edible kicked in, the evening got stranger with vignettes of confusion, giddiness, and excitement. It’s getting harder and stranger to be fucked up wearing something that glows behind me to deal with that insanity along with my own internal insanity.

Downstairs on the dance floor, this little unfamiliar bear guy came up to talk to me. We exchanged some pleasantries until he said, “Roar!” Of course i had to roar back, so we kept roaring. I’m guessing he knows me from another event, but given his make-up as a little bear guy, the name and face were sadly unrecognizable. Such a drive-by roarer.

Later in the evening, Joseph with his vaguely Egyptian features and goatee emerged like the ghost from Bartleby the Scrivener. We talked briefly. He was between parties: Go Bang in SOMA and another event at the End-Up. He told me that clubs hate people like him: he only does guest list and doesn’t drink, so he floats free through the night life.

I ran into old acquaintances: half of a Priceless contingent from a festival many, many July 4th’s ago up in Sierra Mountains. The two of you had gone to sleep early that night and certainly slept soundly in your tent. I brought seven back to our campsite on the hill. Three of these seven recognized me at Priceless and wanted to know what I had been up to all these years. There was some attendant awkwardness on what to do next.

Around 1, the downstairs dance floor cleared to make way for a performance. Two drag queens marched in, dressed in red and blue cardboard rock-’em sock-’em robot costumes. They chased each other for a bit until one picked up a bat. He started swinging pretty hard at the other and managed to knock the red robot to the ground. I was stunned.

The evening ended for me with a vaguely Mexican indie-grunge band. They bridged a song with a really long but funny spoken word on waiting in line at Center Camp for coffee. I felt back at Center Camp, still at Public Works, but wait it was just another Saturday night.

I get so jaded with San Francisco, but I need to remember how still fresh lively the nightlife can be in this town. 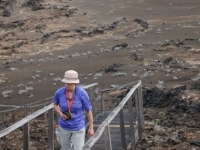