From my eighteenth trip to the desert, I return from Burning Man dusty, exhausted, cleansed, and satisfied. It was a strange year – not for the hijinx or epic drama – but for its calmness. Here are ten thoughts from Burning Man 2018:

10. My friend Major saw most sunrises on the Playa. Others managed to stay up 36-hours in a row. I saw just one sunrise after an evening of careening and cavorting with Scott, Stephanie, and Pete. Faced with the extremes of heat, cold, dry, dusty, plentiful alcohol, and enough drugs to either enthrall or kill small countries, I seek balance. I finally can accept sleep quite early at 3am. I’m not the guy that stays out so late. I have things to do in the morning, like make pancakes and get to Celestial Bodies for noon cocktails.

9. I camped with just two other people my first year on the Playa in the late 90s. I’ve also bedded down in a pod of 6 people, a camp of 150, and even a village of 250. Pyramid Scheme, i.e. PySky, had 22 camp members, large enough for infrastructure like an art car, kitchen with plug-in refrigerator, and experiential diversity – but small enough to know everyone and not sunder cohesion. I like this; I prefer to camp with 6-20 people.

8. I sheepishly admit that I’m a veteran who loves Center Camp. This essential canopied structure proves the plebian agora for the new and old to explore. Within Center Camp, I’ve drawn portraits of strangers, monkey chanted, and hunkered down in wind storms that threaten to tear away the tall flags. This year, only once did I walk through Center Camp on late Wednesday night. I found the large, enclosed space rather gray, empty, and boring. Although others still may crave the commercial coffee within,  I’m over Center Camp.

7. I typically obsess over The Who, What, Where, When Guide that lists the schedule of many Playa events. The paper guidebook is a gateway to possibility for morning pancakes at 7 + G or an evening orgy at 2:30 + I. Most years, I try to attend daily at least one educational event, such as meditation, yoga, or spirit-animal exploration. I barely picked up the guide this year. Not only do events seem rarely to occur when posted, but also I have found back in San Francisco calmer and more focused resources for self-improvement. If I want yoga, I know Garrick, the teacher I like best. If I want to improve my communication skills, I have a Stephanie with whom to practice. Although I’m still glad so many events rumble onward at Burning Man, I’m done with The Who, What, Where, Where Guide.

6. Much of my excitement of Burning Man centers around unexpected intimate moments: new friends, deep conversations, getting to know better folks I see rarely in San Francisco. I’d like to plan the calculus: people + chaos + alterations = intimacy. However, closeness cannot be programmatically manufactured. I learned this year to accept the moment I am in, not to force my expectations on the event. Most of my memorable encounters occurred during quieter times: listening to Kev Mo tell of a burning pot of oil, fixing an unexpectedly-dark art car, drinking a Playa Cosmo with Sunshine at Celestial Bodies, or picking up Pete’s shredded necklace.

5. Our drugs didn’t work. Either I’m getting old or I didn’t take enough. The psychedelics brought no hallucinations. The entactogens lead to some jaw clenching but no overwhelming euphoria, even dropping us off into a deep sleep five hours later. I certainly drank a lot, but suffered neither hangovers nor stumbling. Instead of forcing more to chase the dragon, I accepted the relative sobriety and enjoyed peaceful mornings. For most days in years past, overheated total hungover collapse consumed me well past sundown.

4. Exodus need not be a sad shit show. As I am usually well organized, departing the Playa often means cleaning up other folks messes, suffering in long car lines through exodus, and nearly collapsing on the drive back. One year, I foolishly pushed my car (The Roar Taxi) across the desert to the gate road to prevent running out of gas. Another year, dysentery demanded hazardous, feverish solo driving over the Sierras. Last year, a broken trailer axel delayed our arrival for three extra days in Reno. This year, as the event drew to a close, Stephanie and I packed up our shade structure over a leisurely afternoon. We took down the three Sunflowers in less than an hour. I didn’t even have to drive; a charter bus from Mystopia camp navigated a secret utility road past the long car lines, stopped in Reno for a fun dinner, and deposited me at the San Francisco Best Buy parking lot, four blocks from my house. In the future, I’ll take the bus to and from the Playa.

3. Art projects work better the second year on the Playa. I brought the Sunflowers back much better than before. Last year, I hauled out two Sunflowers whose petals were randomly oriented with an LED mapping that sadly was wrong. Last fall, I figured out how to ziptie petal networks to sharpen the sunflower geometry. I mapped the spirals correctly to match the  simulator. I built a third Sunflower with spare parts from last year. I even learned how to tie knots, build proper frames, and attach yellow fabric petals. The Sunflower’s first attempt was brave and haphazard. The second year was calm, satisfying, and successful.

2. I inspected a ton of art, focusing on LED art pieces. I was quite amazed by a lit-up icosahedron set up close to Luster Cluster. The artists hung the brilliant solid from an etched wooden frame, covered the generator with benches, and even hid the wires and electronics behind structural elements. This icosahedron was a complete, finished piece. In the future, I want to focus on smaller pieces that are better constructed. I may be done with hand-cut plastic and tawdry white fabric. Construction henceforth may be more expensive but the finished work might be cleaner and more durable.

1. On imminent departure to the festival, I joked, “This year I’m going finally to do it right.” Having completed three successful art projects, set up cozy shelter for Stephanie and me, prepared  decadent dinners in advance for the entire duration of the festival, and not worn myself out, I have finally done it right. Winning Burning Man, however, brings some attendant sadness for I lack strong motivation to return. Preparations for the festival can consume an entire summer. I may focus my energies differently now on smaller, more intimate, less exhausting gatherings. I would return to the Playa if a brother wishes to attend, or if I team up with a large arts collective to set up an enormous art piece. Otherwise, thank you, Larry Harvey. The festival has taught me so much that I am ready for new adventures and challenges. I have won Burning Man. 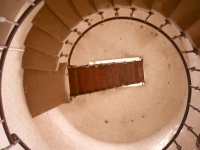