It’s seven in the morning and I’m hurtling through the air in a steel can back towards San Francisco via Phoenix. I’ve been up since 3:30 in the morning (feels like 2:30 with last night’s daylight savings clock change) with little sleep, as Ray wanted to explore Albuquerque bars on a Saturday night. We rocked the casbah for a brief forty-eight hours together on a weekend away in the Southwest.

Brother Ray hit me up about a month ago about his spring break plans. He first wanted to fly out to do Mardi Gras in New Orleans with his friends Lee and Todd. But after the Fat Lady sang on Tuesday, he planned to pack up his Louisiana stakes to head somewhere else for the rest of his break. Based on my ravings from my last year’s trip to Santa Fe, he booked a flight for a quick weekend in New Mexico. Family is growing increasingly important to me, so instead of letting Ray wander the Albuquerque avenues alone, I plunked down for a flight to join him.

Coworker Glen kindly shuttled me Thursday afternoon from work to the airport so I could board a direct flight to Albuquerque. Ray picked me up in his rental car on the other end. We tried and failed to find much open past midnight on a Thursday night (the 24-hour brewery was closed) and settled for a college dive bar before calling it a night.

In the morning, we ambled from our shabby, desolate motel where we were the only guests in search of breakfast. We settled on a diner oddly located in a pharmacy. When Ray mentioned that his local high school just cancelled classes because of the flu and I learned that the pharmacy had only two remaining flu shots, I offered to buy us both vaccinations after coffee and breakfast. I felt like a responsible adult, getting my shots before embarking on a long day ahead of touring and drinking.

We drove north to Santa Fe, having more enchiladas for lunch with Hatch chili sauce. We had a single goal for Santa Fe: Meow Wolf, the immersive installation in a converted bowling alley. Although Meow Wolf was my most cherished site of 2018, would it hold up to a second pilgrimage? I was happy to show my brother psychedelic art in a way that felt like taking him to Burning Man. However, without the pharmaceuticals and with the prior visit, Meow wasn’t as magical as the first encounter. Nonetheless, I knew my way around the enclosure, could revisit the pieces I wanted to see again, and spent some time inspecting the infrastructure behind the art.

When Meow Wolf wound down after 9pm, Ray and I drove next door to a friend’s new apartment. Jeff moved three months ago from Boston to San Francisco to embed himself more with Meow Wolf and its electronic arts culture. Over tea, we got to discuss small city life in New Mexico, the intricacies of programming LEDs, and a career in art installations. Although we both build LED displays, we work with our own style; Jeff is much more interested at mapping video on to pixels, whereas I like to dive into bespoke algorithms.

Saturday morning, Ray and I wandered Santa Fe. We stopped for toast at the excellent Sage Bakehouse. We overheard a first date between a widower and a potential match. Santa Fe may be where an older generation starts new chapters. The Contemporary Native American Museum offered free admission, so we wandered their grounds. A brewery opened its doors at noon so we could be their first customers for a flight and a game of Battleship.

Ray suggested hiking and had a spot in mind. We drove west of Santa Fe to Kasha-Katuwe National Monument where we climbed up a slot canyon past “tent rocks,” huge Coyote-and-Road-Runner piles of sandstone. As the slot canyon still filled with winter show, park rangers let hikers poke just a little way down the path.

We checked back into the same desolate Albuquerque hotel along Route 66 where we were the only residents. Next door, a food court and outdoor bar called El Vado sprang up to gather the hipsters. We drank more beer with chipotle Southwestern pizza.

With a 6am flight looming, I suggest an early sleep. Ray counseled for exploring downtown Albuquerque. We had a quick pint at the excellent Marble Brewing that managed successfully to blend industrial brewery architecture with twee Edison bulbs. After the brewery, the brothers hit Sisters, a bar club with an excellent jazz and funk band. During the break, we beat up a couple pinball machines before calling it a night at midnight. There’s hope for Albuquerque and most small cities in America. 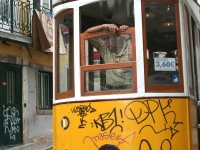