My parents are broken. My brother is broken. I am broken. We are too late to fix. Instead, I look through the mangled pieces and wonder about the wreck.

Out of guilt, hope, and regretful ritual, I travel home to Wellesley, Massachusetts twice a year – summer and Thanksgiving – to hole up with my parents in my childhood bedroom. It is always a difficult return to my past to sink into a low-level but fundamental dissonance.

This year, my money was tight and time plentiful – I’m unemployed, so I booked 7 nights with my parents. I considered breaking up long suburban stay with a bus adventure to New York City, but the New Yorkers were away in Mexico City and I’m realizing that my parents will not be many more Thanksgivings in this world, so best to get tired of them now than regret years later that I could not do more.

My parents are cartoonish in their disconnects so I could write novels and fix-it manuals about them. It can be spiteful reporting, but I feel if I understood and navigated them better, I could navigate my own life’s relationships on healthier waters.

My father (86) steadily goes deaf. He no longer talks on the phone, so this visit (and my summer excursion) are the only times I will interact with him. He no longer sleeps with my mother, and likely no longer sleeps much at all, getting up most hours of the night to go to the bathroom. With his deafness comes further withdrawal from the world. He has never had friends and never wanted to socialize, either in competitive games or joint projects. We sit together twice per day for twenty minutes to have a meal. He eats little, but half of that little is dessert, as he is addicted to sugar. He finds amusing my aversion to cake.

I thought I would like to tell him more about my life. I want him to be proud of me, for him to support me through my battles and cheer on my victories. He has tuned out enough that he either doesn’t remember or doesn’t care about my big moments.

I once wrote recently to my parents that I was dating Stephanie. They have never asked about her again. A few days ago, I tell my parents I’m negotiating an offer for a job. They do not ask for either the name of the company, the company’s purpose, or my role there. My father only wants to know how much I will make. It is as if everything outside of this house remains a distant, unknowable, untraceable, and unnecessary abstraction. They know of none of my friends. My mother will point out at the grocery store the 80-year parents of fifth-grade classmates whose names and I faces I have long since forgotten.

Dad spends his day sleeping, watching television, catching mice, and buying trinkets. The real tragedy is most of all he just wants to be helpful, but no longer knows how. He does the dishes, brews after-meal tea, and offers to buy lunch. I would like to do something for him, but we lack the tools to interact.

My mother (81) has a different agenda. She desperately wants a friend but knows not how to share information. She triangulates instead, asking for the odd details about where my brother’s friend is staying the night and whom he might be seeing. In the morning, as soon as I enter the kitchen, she watches which cereal I pick, asks whether I eat something similar in San Francisco, and why do I have the odd pattern on my socks. I think a normal, gentle, morning salutation could be, “How are you? Did you sleep well?” but we’re off to smothering inquisition of minutia. I respond defensively in ways I don’t like: sarcasm, shut down, and run away.

She too has few friends. She relates to us through the safe but antiseptic topic of sports. Like my Dad, she really means well, but lacks the empathy to convey goodwill. The daily grocery store run is a frantic search to transform packaged food – most of it unnecessary and unhealthy – into love. I crave not six single servings of yoghurt but a meaningful adventure with my mother.

I rarely speak of my old brother, as New England convention dictates sweeping difficulty under a heavy rug. At least Rob (50) is home again, for he was away and firmly non-communicative for over two decades. He’s a recluse now, spending over 23 hours each day in his bedroom, perhaps sleeping, or surfing the internet, or wishing life were different. He left his job as a night nurse over a year ago, and likely will not work again. We no longer glare almost-violently at each other as we pass in the hallway as we did in my tweens. We even sit together for dinner. But he doesn’t participate in the reindeer games and he doesn’t do much either to interact with my parents. I suspect all suspects in this habitation feel a quiet guilt to each other of how life unfortunately played out.

This house feels like a castle of tragedy – so much opportunity and promise scuttled from accreted years of friction and inability just to talk to each other. I’ve gotten better through my own coping. I once wanted so much to fix all this quiet suffering. Now I let it just grow dead.

I’ve learned that I can’t alone move mountains, so I see this family situation more abstractly and distantly. I am mostly just waiting for my parents to die, as my rapport with them has not improved for decades. They are passing idle years that I hope at least will be pleasant for them.

The younger brothers react differently to the sadness here. Brother Ray stays away, communicating about once a year with my parents. He doesn’t hate them; he just doesn’t want anything more to do with them. John strives to be a normal over-achiever: perhaps a model family of his own, even if it kills himself from stress, could pave over the unhappiness here. I keep hope for interaction, trying to let my parents into more of my life, and theirs into mine. I call home weekly, come home twice a year, and try to find shared topics of interest: the stock market, Boston sports teams, the weather, my salary. I go for walks with my mother and accompany her to the grocery store. My love life, anything unusual, the messiness of politics, and scandal are off the table.

I continue to look hard at these family interactions, imploring me to keep coming home again for another dig through the crime scene. If I could just improve my rapport with my parents, then I would not be so broken at dating, friendships, and sustaining community. Those that get close to me should not have to shoulder my baggage, but should realize nonetheless how it affects me. At least for now, I require strong interactions with a high level of communication. I need to share life in ways I cannot with my parents.

Driving poorly to get a sandwich, my Dad asks me in the car, “I always wondered with four sons why only one got married?” I wanted to scream back at him, “because you have no friends, you have shown no interest or openness in my love life, you show no affection to your wife, and the two of you gave a model for love, only one that was broken and inhospitable.” I answer, “I guess it just didn’t happen.”

I fly out tomorrow back to San Francisco where I can put my family grief partially to bed three-thousand miles away, but still stuck in me. I sense some year soon, I’ll get word that a parent is sick. It’s inevitable and tragic.I have already started grieving. There’s been a deadness a long time already in this house. I try to shed the guilt of not making more of my filial rapport. I tried, I really did, but it wasn’t good enough. 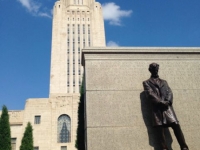