After a sad Saturday with Stephanie in Fremont, I took the evening BART back towards San Francisco. On the bus bridge through Oakland, John Major contacted me to say that he was still at Public Works club for their 8th Anniversary party. Having DJ’d as part of Polyglamorous from 3-6pm that afternoon, he kindly put me on the guest list. I couldn’t make his gig; that day, it was much more important for me to patch things up with Stephanie.

Public Works is just 3 blocks from my house and I did not want Major’s kindness to go to waste. So dropped my bag, did a ten minute “turn” in my apartment, bolted a shot of whiskey, donned some club clothes, and marched down 14th Street at eleven o’clock.

Public Works’ 8th Anniversary party was in full swing, as the event started Friday night and was to last thirty hours straight until late Sunday morning. In this chaotic war zone meets dance marathon, many-like John-had been up all previous night. Veterans cycled through for their second and third tours of the weekend. The dance floors were slick with a days of beer and sweat. Fortunately, everyone moved in convivial slow motion as manic energy wasn’t required to get it all done in the usual few hours. We would be here awhile.

As I sallied forth through the rooms, I ran into a small posse of those I knew. I felt like a fresh recruit to the front line, stationed amidst the trace fire to bolster morale and relieve the wounded from duty. Two women dj’d chaos upstairs in a small room whose walls were lined with shiny aluminum.

I was smart enough to bring only a license that expires on Tuesday, a small set of keys, two $20, and my phone. I was dumb enough to lose my phone between 1-2am. I had to wait until 4 for the bars and coat check to quiet down. Nobody found my phone.

I woke five hours later at 9am Sunday to shamble back to Public Works before the event wrapped up at 10am. Still no phone. I’m sad that my drinking contributed to precious items flying out of orbit. That’s why we cannot have nice things.

With no job and few places I need to be, I wonder whether I need a phone at all. Depression keeps me indoors working on projects and repairs, not calling people. I do have an old iPhone that I’ll check to see whether it works if I don’t hear back from my phone by Tuesday. This has not been a good month. 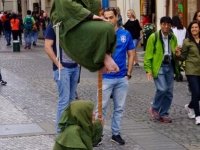