Out of wood slats, vinyl tubing connectors, staples, plastic sheets, zipties, and LEDs, I have built a hemisphere, six-feet in diameter and three-feet tall. I worried that the wood structure would be too floppy. The sphere does flex into a range of lumpy egg shapes, but it is strong enough. The punch-through cells do prevent light from bleeding into adjacent cells.

Trouble is, the sphere is too dim. When I prototyped a 10-cell face, I checked that the light did diffuse evenly across each cell without a central dark spot, but I did not check that the cells were bright enough. For these Sphere cells, I have stretched the available photons too thin. A previous 5-foot Square art pieces contains 144 LEDs for 25 in2 / LED. This 6-foot Hemisphere has just 72 LEDs for 226 in2 / LED. The lights in the Hemisphere need to stretch across 10x more area than in a Square. “If you build it, they will come.” If I build a dim blob, no one will see it. I’m not sure how to brighten the Sphere.

I can double the LEDs to put two lights in each cell. To add an additional light, I would need to rip out the current white-plastic cell walls and put in new ones that have two punch holes. I would also need to spend a day soldering a second strand of lights. Placing the second light closer to the surface of the fabric would make diffuse the second light less and make it much more glaringly visible. Tom suggests avoiding this second-LED route.

I could cut down the size of each cell. Currently the lights are arranged in a hub and spoke geometry with ten lights each around six hubs (with another six hubs planned for the lower hemisphere). Reducing the cell size does keep the angles the same, so I can keep the lights affixed as they are in each hub. However, I would have to free each ten-cell daisy, cut every cell shorter and reattach. My spidey sense suggests that I can double the brightness by halving each triangle area by every 31% reduction in length (1 – 1/sqrt(2)).

For a third possibility, I could try to reflect as much light that hits the sides and bottom of each cell back up to the top fabric. All of my previous pieces are two-sided (and two dimensional). The side-mounted LED illuminates the front and back faces allowing the pieces to be hung as screens. If I forego inside illumination of the Sphere, I may be able to salvage 50% of the light. I could put reflective tape on the cell walls. I would need 30 inches of tape per cell for 60 cells, requiring 150 feet or 50 yards of likely-expensive metallic tape (actually not expensive as reflective tape is used frequently in construction). I could use a silver reflective fabric for the inside cover of the Sphere. Although this reflective route could be the most expensive fix of the three pathways, it might be the least laborious.

I cling to the mantras of my engineering god, Thomas T. Landers. First, “prototype.” I’ll tape up one cell and back it with shiny silver spandex to assess whether either the taping or the reflective backing dramatically improves light collection. Second, “Like I always say, if it was easy someone would have done it already.” I may have a Sphere roommate residing in my living room for quite awhile. 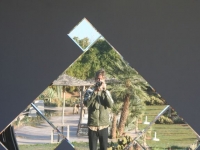