The joke for Art Prize is that public art attracts a lot of entries of faeries and dragons. Indeed, wandering around Grand Rapids, we encountered riverside metal dragon sculptures and luminous paintings of faeries – which are not necessarily liabilities. Much of the art hails locally from Michigan. Part of Art Prize’s ten years of influence encourages those are not normally artists – retired machinists, automobile repairmen, seamstresses – to work over the year to submit an art piece of their own.

I worry that Art Prize focuses more on craft than content. A public vote supports skill and size, such as in painting or sculpture, but shies away from controversy. There were a few religious-themed pieces, such as a large charcoal portrait of Jesus, sadly depicted as white, as well as some military artworks, like a well-done painting of four soldiers on the back of a helicopter in Iraq. Yet only a few pieces brought up either race, the environment, or poverty. One hotel did have portraits of homeless people, and another museum had an excellent, nuanced charcoal of a black woman. An incredible painting called “No More Casting Couch,” featured a angelic woman in black about to mace a depraved Harvey Weinstein. Overall, there were few challenging works, either because the contest historically has been publicly juried or because western Michigan is quite conservative.

Sadly, unchallenging art in quantity can get numbingly boring. I can appreciate the craft of construction, but a lack of personal engagement causes me to gloss over a gallery. I’m learning that an important component of an artwork is its fresh idea, not just its execution.

As Art Prize is an art festival and not a tech conference, much of the works excelled in technique. There was an amazing marble sculpture of an Native American head. Some of the welded pieces, such as a marvelous phoenix, were assembled from reclaimed metal parts like forks, saw blades, and farm rakes. Yet the few LED artworks were terrible, all of them composed of standard strip lights set on the factory rainbow-wash show. I can’t tell what established artists think of Art Prize; is the contest a folksy throwback beneath “real” artists, or a good way for a new artist to establish herself?

This year’s grand prize winner, called “The String Project”, featured an excellent series of large portraits, each involving the same horizontal white string and some exotically-dressed people from places like Vietnam, India, or Grand Rapids. Although the piece in toto brought the world together, connected by a string, I don’t know whether the people depicted were viewed as funny-looking curiosities or citizens of the world we should care about.

I’m not sure whether Art Prize is ready for my large LED installations, but I did not see any anything like them in Grand Rapids. I would need to secure an indoor space that could be made dark for much of the festival – a bar would be great or a club like those in the Big ol’ Building. In spite of the exhortation above to confront the viewer, my work isn’t challenging either, unless blinky lights prove novel and disorienting to the Midwesterners. 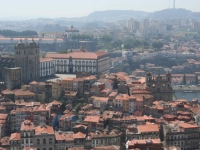