It’s uncanny to go from something so quickly to nothing. The story – our story – has finalized with a beginning, middle, and end that fit on a bookshelf. In between, moments and memories fade historically and progressively forgotten. The replicant Roy Batty closes out Bladerunner, “I’ve seen things you people wouldn’t believe. Attack ships on fire off the shoulder of Orion. I watched C-beams glitter in the dark near the Tannhäuser Gate. All those moments will be lost in time, like tears in rain. Time to die.”

Some people process agony through their therapist or their friends. I just write a lot. Get as much of this on to paper, into the world, and out of me. This is not an account of how things happened. These characters are fictional. This is the tidy package of what might have been.

Man is having trouble getting over Man. Man hopes to change Man to suit his needs. People, like the other Man, don’t change.

Woman moves to the same state of Man. Man spends year introducing Woman to his world. Man worries what Woman will think of his world. Woman finds it unusual and perhaps even interesting. Man finds comfort and confidence in Woman.

And I know you have a heavy heart; I can feel it when we kiss

The love I sell you in the evening, by the morning won’t exist.

Man shows Woman his world. Man and Woman walk to the Ocean, climb hills, and make babies (only Dutch). 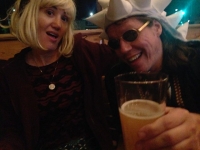