Ruben moved long ago back to California before I did. As I was resettling in San Francisco from Boston around 2008, he had already moved to Sacramento to start teaching history, mostly American, at Sacramento State and Sacramento City College.

For ten years, every few months, I’ve been driving, busing, or taking the train to check out Sacramento over a weekend away. Coworkers and confused friends often ask me, “Sacramento!?” I tell them, “you can park there. The streets are not crowded. Sacramento is affordable.”

For a long time, Sacramento was the anti-San Francisco, the antidote to twee finery, which I do like, but occasionally seek relief. Sure, I could park in front of Ruben’s apartment, but Sacramento coffee was terrible, and there was little to do, so Ruben and I caused our own trouble with Yip-Yip’s, cooking adventures, bike riding, and bar crawling.

Sacramento changed. Temple opened up good coffee. Fieldwork Brewery set up an outpost. The ramen craze sprouted up all over town. Lofts went in. The B-Side Bar touted vacuum-tube, indie cool without San Francisco’s attitude. With the best farmers’ market in the country under a freeway overpass and bike lanes everywhere, Sacramento offered San Francisco’s strengths without its detractions.

My new company issues only six annual holidays. When Presidents’ Day hit in mid-February, I had to get away just to get away. I hopped a Saturday afternoon Amtrak from Richmond to Sacramento.

Before dinner, we stopped for a beer at a new midtown bar called The Cabin. Think deer heads, a ceiling of circular log thin sections, raw wood, fireplaces, and flannel. Ruben scoffed at their seven-dollar, twelve-ounce pours.

Back at the ranch, Ruben rolled out fresh linguini for his new favorite dish of cacio e pepe (cheese and pepper). I added too much salt to a raw kale salad. Along with friends Mitch and Maggie, we drank two bottles of wine and played a board game called Mysterium. The crew got irritated by such an inscrutable ghost (me). Either from tiredness, way too much wine, or simply just stoned, I passed out at midnight.

Sunday, Ruben wanted to show me a new part of town. Sacramento recently tore down their basketball stadium to put in a new arena, surrounding businesses, and lots of apartments. We checked out Punch Bowl that offers a motley selection of bowling, virtual reality, foosball, hamburgers, and bars. Trashy, no, as Punch Bowl features Edison bulbs, large art work, neon chandeliers, funky couches, and an astute attention to detail.

Punch Bowl is a great place – family friendly and booze for Dads, but… I asked the waitress, “how much are the Bloody Mary’s?” “Ten bucks.” “I’ll take two.” “That will be $23.39.” Everything in Sacramento now has tax, and not just a little tax, almost ten-percent tax.

Sacramento has grown up. The city used to be affordable and empty, but uninteresting. Now Sacramento has indie cool, but it’s expensive and crowded. I don’t know how denizens afford entertainment on Sacramento salaries, as at least I can throw around Bay Area bling. I wonder if Sacramento keeps heading towards a parody of itself, whether I should just stay back in San Francisco: still expensive, still exhilarating. 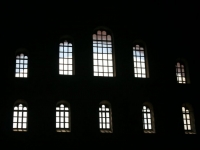