2013 brings a year of retreat and relaxation. In January, I resumed a regular yoga practice. In February, I silent retreated for a weekend to a solitary Santa Cruz cabin. In March, I communed one Friday night with a Peruvian shaman. These days, I try more to try less: slow down! clear away the shrubbery of thought! What are other ways to strip away sensations? How about a sensory-deprivation tank?

One Sunday in mid-May, Greg and I fled the chaotic bustle of Maker Faire to take the BART train back in to San Francisco. I rested briefly at home before jumping another MUNI train in to the heart of San Francisco’s dodgy tenderloin district. We dodged crackheads and stepped around the homeless to arrive at the oddly peaceful basement of the Zazen center for yoga and relaxation.

We had booked time in two of Zazen’s four sensory-deprivation pods. The concierge instructed us on the use of each pod: take a shower beforehand, put on a bathrobe and slippers, open the pod door, take off all your clothes and contact lenses, climb in, and relax in the warm eight inches of water, buoyed by about 800 pounds of salt.

Each curtained pod looked like a large white oven or coffin. Inside the pod was just murky black darkness. I put in earplugs as instructed to muffle further any sounds from outside. Ack, I’m not a water person and would have preferred a warm pile of sand.

Once in the pod, I found the deprivation experience quite pleasant. The water was neither hot nor cold, unlike a lake or a hot tub. As the water depth was so shallow, I never worried about sinking or drowning, and so made little effort to force myself to float. I couldn’t smell much and occasionally tasted the dry salty saliva on my lips.

My soak started with panic. Every flutter of the foot or hand drifted me into a wall. I couldn’t anchor in the middle. Eventually, I stopped drifting. Then, I became overly aware of my poor posture. Crack. Crack. Crack. With lots of cracking, I could unfurl parts of my neck, shoulders, and back. When one vertebrae loosened, another vertebrae tightened. I resolved

More aware of the tension in my body, I could eventually unlock the constraints. My hands fell further into the water when my wrists unclenched. My chest opened up.

As tension fled, my mind liberated itself from the confines of the tank. I fell into a dream-like slumber. I confronted many of the same thought patterns that arouse during my previous meditations: I have a strong need to validate experiences by communicating them to others. Floating solitary in the tank, I just wanted to tell Greg, also floating in a tank, what floating is like. I accept my need for other as neither beneficial nor punitive; connectivity is just part of who I am.

For most meditations, I close my eyes. In the darkness of the tank, I could no longer tell whether my eyes were opened or closed. During one blank period, my eyes uncontrollably darted. I noticed the darting experience and how odd it felt.

Time stopped and hurtled forward. The concierge forewarned that the soak would end with his tap on the roof of the tank. When he tapped, had it been ten minutes or two hours? We had soaked for one hour twenty minutes.

I slunk out of the tank covered in salt, but quite at ease with the world. Facing again some of my mind states, I renewed my efforts to meditate and slow down. I showered away the salt and headed out with Greg for a Thai dinner in the Tenderloin. Poor Greg’s tank was ten degrees too cold. Instead of meditating, he fixated on the temperature difference between air and water; fortunately, the center did not make him pay for his time spent in a faulty sensory-deprivation tank. 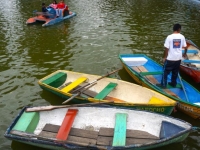