Ever since I started meditating a decade ago, I’ve wondered what it would be like to take the solitary experience on the road, that is, to go overnight on a silent retreat. Contrary to my usual frantic demeanor, an overnight stay would open unencumbered time to sit, look, unfurl my back, walk, think, not think, and grieve. What would it be like not to speak for days? So much of me exists as a response to others and what is planned ever next. The well-known meditation center Spirit Rock rests nearby in Marin County north of the Golden Gate Bridge, but this center’s shortest overnight stay is for at least four nights, more time than I care spare from work.

When my counselor yelled at me one Wednesday to slow down and a friend Jay alerted me to a another meditation center, I booked a two-night stay at the Vajrapani Institute. Friday afternoon, I left work at four and drove south through the outskirts of San Jose and into the Santa Cruz mountains. As the sun set, I climbed elevation into redwood forest and left behind the two-lane highway to make way for a twisting road that became eventually dirt. I drove around ruts and muddy sink holes under two gates of colorful prayer flags in to the parking lot of the main building of the Vajrapani Institute.

A receptionist greeted me with a calm smile and drove me the quarter mile uphill to the meditation cabins. She looked at my few belongings and asked, “Is that all?” Unlike for either foreign travel or a festival like Burning Man, I had brought little. The Institute’s literature strongly suggested leaving behind laptops, reading material, work, even a cell phone. I packed some warm clothes, a toothbrush, and two empty water bottles.

The receptionist told me another guest checked in for thirty nights. I would stay just two nights from Friday sunset until Sunday morning. She showed me the communal bathroom, the showers, the two trailheads into forest, and then my cabin. I would stay in cabin number 5, the fifth of just six cabins, all of them defiantly single occupancy. This was not a place for couples or friends.

She opened the door to a 10×15 foot room with a sliding glass door leading to small porch with outdoor chair and sink. Inside there was a little gas heater, a two-burner Japanese gas camp stove, a single bed, a white Ikea chair, a meditation cushion, a small table, four candles, and a photograph of the Dalai Lama. After her fifteen-minute introduction, she wished me well on my weekend, told me that I could check out on my own, and then left me to my own devices.

Perhaps unlike other silent retreats, there were no guides for this one: no instruction, no lectures, no bowing at each other. Such a different type of trip for me! My usual inclinations would be to unpack thoroughly – but I had little to unpack, to read up on nearby restaurants and attractions – there was no place to go, and to call the friends I were to meet – there was nobody around.

Each day at noon, an invisible caretaker would deposit a bag of food for me after which he or she would ring a bell. The red food bag would contain a big hot lunch and a small cold dinner that I could heat on my own when I wanted. Breakfast I could make from their communal supply of provisions like granola, bread, and jam.

I was not sure what to expect from two days of solitude. Before I left, I joked to coworkers that I would be the one cabin with lots of roaring, or perhaps I would silently invite all the other retreaters over for a silent disco party.

Instead, I fell into my own sort of routine. I sat on the cushion and meditated until my hips hurt from sitting cross-legged at which point I sat on the nightstand and gazed towards the Dalai Lama. I practiced counting, of not-thinking, of noticing: “I’m hearing two crows, thinking about my return to San Francisco, caught up in future events, planning dinner, hearing one crow, leg hurts.” I stared at the twilight, watching as the few stars poked into view over the disappearing forest. I tried to think about Greg for resolution, but lost focus.

When night fell, I turned on the cabin lights and set about dinner. I reheated a ginger-coconut soup and unpacked a green salad with sesame dressing. Meals lasted over an hour (I did not keep track of time), much longer than my usual ten minutes of gobbling. I ate separately each salad leaf and plunged into the diverse flavors of the soup. None of the food was exotic or carnivorous, but the point may have been to awaken the sense of the rich multiple of mundane tastes. I drank a lot of tea, hoping that black tea in the morning would stave off a caffeine-deprived headache. It did.

Night fell. I lit a tea light. I meditated further. I cranked up the heat. Although I was still in California, the alpine climate and February time meant a frigid evening outside not conducive to lingering. I had forgotten a flashlight so I used my cell phone to find my way to the bathroom and back. Every footfall was slow and deliberate, especially since I could not find the unfamiliar trail.

There’s not much to do on a silent retreat after dark. I probably stayed up two more hours and then went to bed, sleeping until sunrise. I understand why monasteries keep early hours in time with the rhythm of daylight. Dinners are smaller than lunch as one does not want to sleep on a full stomach.

In the morning, I meditated some more and then performed a long bout of yoga within the cabin. I finally unkinked my bag and discovered that half of my posture problems stem from clogged hips. I should not cross my legs so much and try to open my (um) groin more – my upper spinal column will thank me.

I was excited to brown toast on a camping rack mounted at an angle on the gas burner. After a diet of simple foods, a small round of cheese tasted exceptionally sour and sharp. I napped midday.

In the center of the Institute’s grounds is a bright white funerary monument to the Nepalese founder, a man who passed away in his fifties around 1984. A poster discussed his life teachings and showed his portrait as well as a picture of his skull on cremation. Life can be brutally short.

In the afternoon, I left the Institute to walk up a path through the redwoods to Castle Rock State Park. Although I walked only a mile, I plodded so deliberately that my steps took at least hour to get there and another hour back. I brought along a snack but no keys, water, cell phone, wallet, or camera. The granola bar from work tasted exceptionally sugary.

Funny about solitary retreats is that guests go out their way to avoid each other. When the noon bell rang, I waited ten minutes lest I saw someone else silently marching to get his or her lunch. I did spy two women on retreat. They looked German.

The day passed and darkness returned. I meditated some more and discovered that the Institute did not supply towels for the outdoor shower. I watched the stars appear again and thought about home. My body felt better but my mind was not at rest.

Sunday morning, I rose again at sunrise, the time I usually get up for work. I made breakfast of granola and yoghurt, did some more yoga, packed my bag, and nodded goodbye to my weekend companion, the Dalai Lama. I took the stairs down to the main complex and found my car. A member has placed an exit questionnaire on the passenger seat.

I drove off into civilization. The first few hours were strange zooming through the alpine roads of Woodside. Much like in a car commercial, I zipped by motorcyclists, adventure bicyclists, and sports cars. How quickly to move from so slow to so fast.

I’m glad for the silent experience, but I need not return soon. Instead, I shall bring the silent retreat in to my loud world. I’ll try to savor meals more slowly, to unlock my back, to walk more gently, to hold at most two things at once, to be more present and appreciative of the current moment, to cherish those near and dear, and to live more simply. Although not intended for work, those cabins could be helpful for time apart to focus on a project like writing a novel. I learned that I quite hard on myself and do wish to live more gently and compassionately. Thank you, Vajrapani. Maybe next time I will be the house that roars. 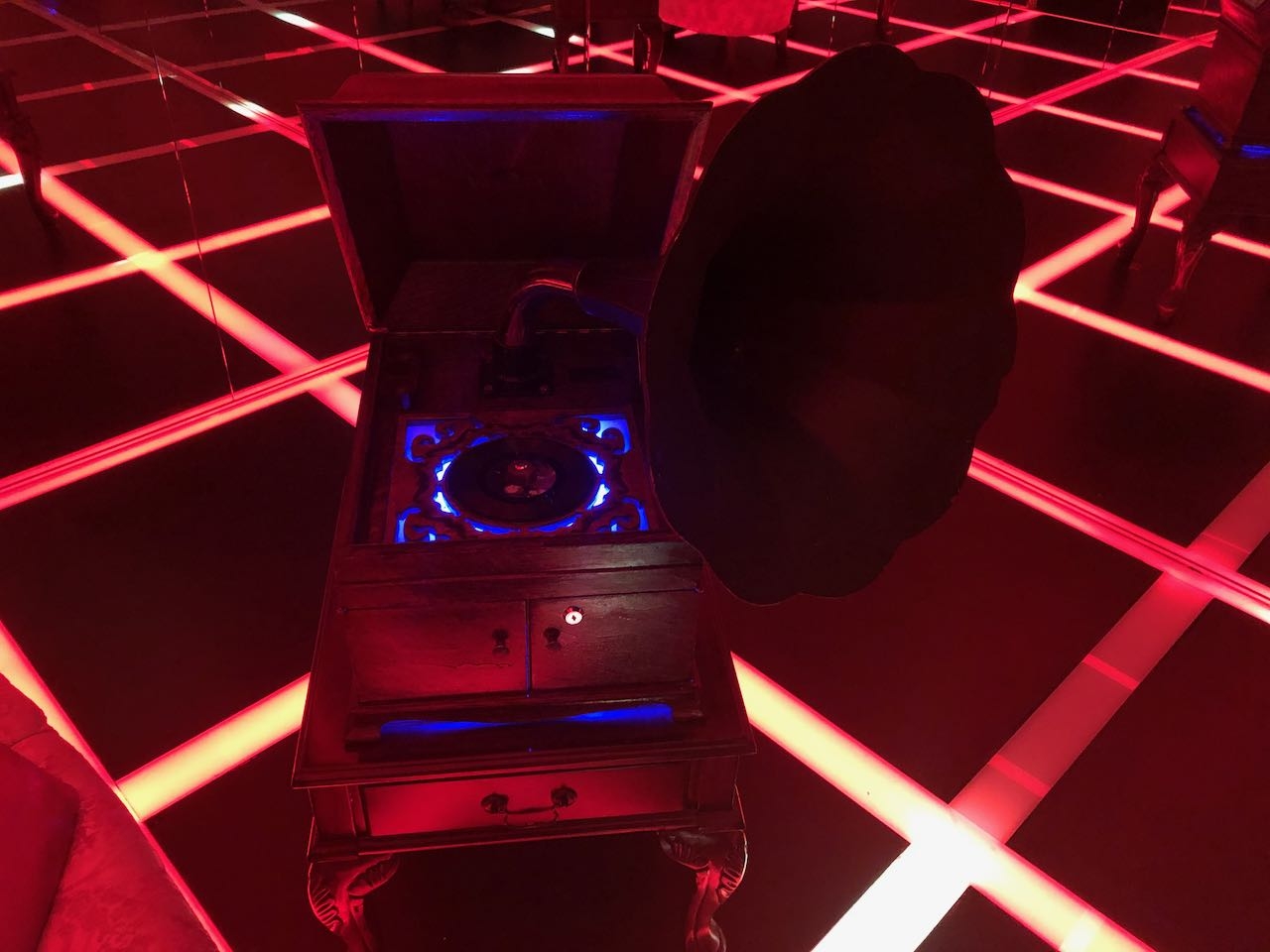