Last spring, I built six LED Fish with scale patterns. For each fish’s triangular tail, I arranged a unique configuration of either 5 or 7 lights. In the tails, I tried out new geometries. I planned to blow up successful configurations into their own full-scale LED installations. The tail that intrigued the most had an almost-random assembly of teardrop shapes that harkened back to folded-paper designs calling quilling.

Quilled plastic is fast to construct, but what it is good for? Learning from Tom Landers, I built a one-third scale model out of stapled manilla-envelope strips and twine. I arranged in lots of formats the chain of paper teardrops, but nothing interesting emerged. Sure, I could make wheat shapes, but the overall structure was too random to be interesting. The teardrops were too long to allow doubling back on their own chain.

Burning Man pressed onward. I stowed away the floppy chain on my coffee table. Last lazy Saturday, I took out the teardrop chain one last time. “Either find something interesting to build with this chain or throw it away.”

I doubled-back the chain to make a candy ribbon. Not interesting. I alternated teardrops to grow sheafs of wheat. Not interesting. I broke up one long wheat sheaf into three shorter sheafs that formed a three-pointed star. A little interesting. If I could make a three-pointed star, what about higher orders? Five looked a lot better. I could even fill in the star’s empty center pocket with a small teardrop star. I’m on to something. Five points may be common for stars, but the prime five lacks easy symmetry. I built a six-pointed star of wheat-sheaf arms centered around a smaller six-pointed teardrop star. Bingo. I ran to the store to buy paper clips to hold together the model. The snowflake was born.

Monday, I cut full-scale plastic strips for the Snowflake’s 55 teardrops. I figured how to knife out a rectangular hole in each strip to hold an LED. Zipties fastened the teardrops together, while a bent six-fold armature of 1” aluminum strips preserved the geometry. I continue to ponder the hexagonal frame, likely out of wood and bent metal corner braces. This is the first LED project I have built in one day.

The Snowflake simply is brilliant, an engaging opposition of symmetries (1-, 2-, 3-, 6-, even 12-fold) against the organic curve of the teardrops. It’s simultaneously warm as a star but forbidding with its points. This is first piece in which I make heavy use of empty interstitial space between the teardrops that makes many of the points seem to float. Furthermore, the empty space, along with the lack of notches or hole punches, prevents bleed of light between teardrops. Off pixels are darker on this piece than any of my previous installations. Pleasingly, the interstitial space holds on to an uncanny amount of residual light. Sitting at the bottom of each teardrop, the LED shines like a candle. The 6 pixels in the center spoke are slightly wider than the rest, dimming the center and setting it apart from the spokes.

Ideas will tell you when they want to be heard, but you have to be ready not only to keep trying but also to listen. I’m already building a second larger Snowflake with more dendrites. 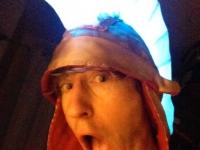