The All Worlds Fair descended on San Francisco for one brief weekend February 23-24, 2013. When the Fair was announced, I raced to buy tickets for the Norfolk group at 7:50pm on Saturday night. I had no idea what I was getting into.

As the night of the Fair approached, a few details emerged, more like random edicts to attendees. The Fair would be held at the Old Mint Building, yes, the San Francisco mint, a relic but survivor of the 1906 earthquake and fire. San Francisco is one of the country’s three historic mint cities; the other two being Philadelphia and Denver.

Admittance would be for a group of about 300 for a particular time slot, such as our Norfolk 7:50pm slot. Once inside the Fair, the group would have about three hours to explore. No digital cameras are permitted. Attendees should wear monochrome: white with black, but mostly white.

I did know that impressario Chicken John organized the event, and even he had no idea what to expect, either success or a flop. We did expect the strange and interesting.

Once outside the Old Mint Building, we stood in line for entry with quite the fantastic bunch of attendees: white fur coats, black and white checkered scarves, hats with white wings.

Our attention turned towards the commotion of a parade of 20 identical women in red dresses and black antennae, led by a fop with a cane in a three-piece red suit. This parade, we learned, was passport control. After our group passed through a passport gate, we sat to fill out forms delivered by passport control: “Form, please,” “Incomplete Form,” “New Form,” “Good Form,” “Reform,” “Next Form.” The passport ladies would swipe one form from out clipboards to replace it with another. I answered questions like who in the group did I hate the most, or what did I dream last night?

Meanwhile, paramilitary troops sternly patrolled the crowd. A colorful few were singled out by the paramilitary and brought near the restrooms. Ah, too much color. Those who decided to flaunt the rules were wrapped in white butcher paper fastened with black duct tape. A man in a blue suit got wrapped in paper from neck to waist. A woman’s large yellow bag was wrapped in white. Yellow!? What were you thinking?

After filling out countless forms, we were ushered between and under a row of elevated passport ladies. The red ladies berated and ripped and inquired until simultaneously they raised their arms to stamp a set of red passports that they distributed one to each attendee.

Grateful for our new red passports, we waited briefly in front of a loading dock. A man in a bowler pushed us together. He readied us to rush into what I thought was a freight elevator. The blast door opened and we raced into: PANDEMONIUM!

We rushed into a hallway, more like a city street, teeming with barkers, a blinking van, bell hops, mermaids, pirates. A bellhop gathered our group and charged us down the hall.

For two hours we explored little scenes in rooms on two floors of the Old Mint Building. Groups of artists had set up in the rooms different tableaux that spilled out into the hallway.

I got arrested for consorting with trolls and was sent to court; I was fortunately acquitted 3-2 by a jury of my peers even if the friends on the jury found me guilty. I bet on one of four racing contestants, each contestant fitted in electronic alternate-reality goggles; the contestants stumbled two laps around a race track. I tasted an elixir made out of the strangest of herbals. I got electrocuted while holding on to a fluorescent light bulb in a chain terminated by a tesla coil. Blindfolded, I swashbuckled a pirate with a cardboard saber. I rode a seesaw with Rob and Ruben in the shape of a mustache – of course this was a mustache ride.

Upstairs, the delights got stranger and even more delightful. I toured characters from the Book of Revelations while a prophet read the apocalypse. The Museum Mechanique had people not robots jerking like animatons: a woman creepily laughed and laughed much like the famous robot Laughing Sal; a grandmother snored on a couch until a girl emerged from under a table to clatter cymbals; a fortune teller pressed my forehead and then bestowed a fortune; a bellhop stamped passports frantically until his batteries ran low.

Another room was empty except for a dancer laying on the bare floor. A floor light cast her silhouette on the far wall. The crowd clung to the walls to give her room as she had 3-foot long table legs attached to her arms and feet. She whirled growing rhythmic circles with the ends of these long legs. Gazing further, I realized she was an amputee; the legs were prosthetics. Brave of her to feature what ostensibly might be a deformity. She inspires me to flaunt my own deformities, physical or other.

As the night wore on, the various rooms would simultaneously go mute. The crowd was ushered from the ground floor on to the second floor into more scenes.

When the second floor went dead, we were ushered into a larger dark ballroom filled with hanging strands of crumpled white paper. Thunder rolled and lightning flashed. Outside in the courtyard, figures in white, some on stilts executed an intricate drama that we did not fully understand. We crowded around windows to peer outside at the white players.

As the thunder ebbed, some of the players came into the ballroom. Five women in white, joined in a line at their waists, shuffled around the seated crowd. In a corner, five more women in white bowed and gyrated. When the two groups left, two dancers jumped in the middle of room. The female dancer did several headstands on my surprised lap. So many of us did not know what to expect.

When the final dance ended, we wandered outdoors in a daze . There were no customary T-shirts, goodbye wishers, or the typical concert detritus of beer bottles and fliers.

We knew we had just been part of something fantastic. I had gorged on a cake so rich that it would take a week to fully digest. John and I debated whether we should have joined the call for artists a month prior. I quite enjoyed watching the spectacle this time instead of building it.

So many of the original edicts made sense. No photography: no pictures remain of the event, no encapsulation, no frantic worry during the event of what exactly to photograph to upload immediately to Facebook for validation. We were present. Wear white and black, mostly black: the crowd was perhaps the singular best performer. Passports: I still have my red passport. Each stamp is the memento, the veritable photograph, for each of the rooms I visited.

More than just the creativity, the logistics of the Fair were impeccable. The organizers quite skillfully moved the crowd along from the ticket line, inside, through two floors of mayhem, to finish with a performance. We never felt bored, manipulated, or rushed. I did not see everything, but I did see many things. The event felt active, amazing, confusing, and deliriously fun.

The return to the street may have been the harshest transition. For three hours, San Francisco felt so far away. 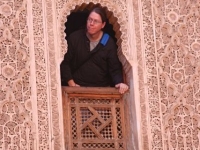