This Sphere may kill me. In the fall, I decided to tackle a long-standing project of the Sphere, a 120-sided, 6-foot diameter, white fabric and LED sphere. The previous Snowflakes project taught me how to build the Sphere’s frame and cells. I had sabbatical time at home to attempt a risky project extending my usual flat work into a new third dimension.

Unfortunately work happened. Before I started work again in January 2019, I built out half a Sphere, geometrically known as a hemisphere. I have yet to begin the second half of the Sphere. So the irascible, unfinished hemisphere takes up my living room like a giant mushroom or sits on half of the couch like a giant white clam.

I’m almost done with this first hemisphere, or am I? I assembled the hemisphere’s frame, soldered the lights, stapled in the plastic cells, and sewed the cover. I inserted the hemisphere into the giant pillowcase of a cover. The cover’s exterior face stretches well and tightly over the outside of the hemisphere. However, the cover’s interior face sags disconcerting, throwing the cells off dim and out of focus. This week, I started laboriously hand sewing the two pillowcase cover faces to the underlying plastic frame. I quickly finished stitching the easy outside cover, but the saggy inside requires sooo many baffle points. Furthermore, I misaligned the interior cover so the pentagonal seams goes through the middle of some of the light cells instead of gracefully along cell edges.

The Sphere cover is not perfect, but is it good enough? There’s only one person who can answer that question, only one person who has to live with the final project, and only one person who has to fix the Sphere if the current approach is not going to work. Last night, I wondered if I can cover the Sphere’s outside with the current white fabric but on the inside, I can staple a plastic diffuser across the opening of each triangular cell. This fabric outside / plastic inside might make a cool effect that permits 1) removal of the outside cover (like a tent fly) for storage, laundry, and repairs, 2) great isolation of each LED pixel from its neighbors, 3) a new direction for my work.

Before taking apart the hemisphere – cutting all of the hand sews I spent two weeks installing, separating the two faces of the pillow case (math tells me 17.5 feet of seams) – I’m gonna Tom Landers this project decision. I’ll build out one face (10 pixels) of the second hemisphere with the new design choice (fabric outside, plastic inside) so I can compare the two. If the plastic approach wins, I’ll spend a week tearing apart the first hemisphere’s cover.

It’s exasperating to spend a week undoing two weeks of work. However, with my new job, I counter-intuitively have tons of time for art projects. When I wasn’t working, I spent most of the day building out LED projects. It was what I was doing, so efficiency and closure were paramount. Finish and move on to the next project. My regular software job pulls my focus, leaving me a leisurely schedule and excuses not to work on art projects. These Spheres may kill me, but will also get done when they get done. In the meantime, the giant clam has claimed half of the couch. 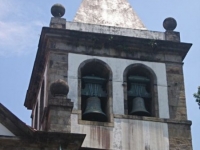