To prepare for tomorrow’s interview, I read the biographies of those at the company that might speak to me. I cannot discern ages, but so many, from the Chief Technology Officer to the Head of Software Engineering, are just a few years out of school. They are already successful, while I am an old man struggling to land a job. Did I make a mistake planning a career?

I’m realizing that chemistry’s limited practicality was a mixed blessing. There’s still enough chemistry jobs in certain sectors, in certain locations, to attempt a career as an industrial chemist, but not a lot of opportunities remain. I spent over ten years after graduate school – 3 in postdocs, 9 at two different chemistry jobs – flailing to make chemistry work. I don’t regret all those years, but that decade did not advance my career much.

Better perhaps if I had graduated in a less-relevant discipline. Those that studied astrophysics, like the Head of Software Engineering, fast realized they needed to pivot their skills to get work. If I had struggled graduating with botany or atmospheric sciences, I might have sooner embarked on software engineering.

The past is the past, and the now is the now. Fortunately, I have a good sense for my current passion for Data Sciences, a good blend for me of lab work and the computers I’ve tinkered with all my life. I can set my eyes on this data-science prize, dive into the discipline, and soon try to rise in the ranks.

Furthermore, I need to be careful not to long for what I don’t have. Alex is a CTO now at his start-up, and he hates managing people. Scott enjoys directing research at his small company, but admits he doesn’t have time for much else in life, including family. Stephanie pushed to become a doctor, and then realized that profession took everything from her. Perhaps I just need a decent salary, good problems to solve, some modicum of respect, and time outside of work to travel, explore, tinker, and be. 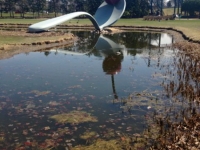