As former coworker Adam has been down on his luck, I offered to take him out Tuesday night to the Odd Salon lecture series at Public Works club near my house. But first, adventure. We met just after five o’clock (Adam gets to work quite early each morning) at 18th and Mission to grab two stools at the tiny Yamo restaurant. Over Burmese tea-leaf salad (which may be the best dish in the Mission) and their cold noodles, we caught up on life.

Afterwards, I hustled Adam over a block to the even smaller Little Horsey’s Saloon in the Royal Cuckoo Market for exotic 1960s cocktails, most of them made with vermouth, bitters, and a single, cartoonishly-large ice cube. Over drinks, we caught up on life. This tiny overlooked bar is one of the most convivial spots in San Francisco.

On to the show! We cruised up Mission Street to Public Works. Upstairs, we had a couple of east-coast IPAs brewed at neighboring Standard Deviant. While Adam got a second round, I ran downstairs to select us two seats for the show.

What a show it was! Over lectures, we caught up on life. Six lecturers on the topic of Absurd explained the history of water slides, the 222-0 football victory of Georgia Tech against Cumberland, the blind but enormous Greenland shark, Roman emperor Caligua’s bloody reign, American novelty music, and a rousing entreaty by Leonard to embrace Camus’s nihilist absurdism. An evening’s entertainment was lashed together with lots of education. Around ten o’clock, I walked Adam to the 16th and Mission BART station, then headed home myself.

I know a ton of people in this city, so I run into familiar faces wandering the streets. At tiny Yamo restaurant, psychologist Space sat next to us. Upstairs at Public Work, “The Famous” Michael Sallazzo greeted us for the lectureeries. Downstairs, artist and emcee Bernadette passed through the club to scope out the venue for an upcoming weekend art installation. I sat next to a guy in cat ears whom I met out on The Playa at Comfort + Joy.

I’ve also learned that I have a super power for adventure in almost every part of San Francisco. Drop me at a random intersection and I can amass a series of memorable activities to please a group. Like Timothy “Speed” Levitch, the frenetic tour guide after whom Seinfeld’s Kramer was modeled, I enjoy the shared experience of leading people around.

Although fun, adventuring does exhaust me. I want everyone to have a good time, even if I’ve seen or done the path a million times before. Afterwards, I want to go home alone to reflect, work on my own projects, and slowly plan for the next adventure.

I’ve had so many adventures this year that I’m tired of company. I need a lot of space and time now to hunker down and figure out what to do with my life. Hanging out all day distracts from the important and slow work I need to do now to think about career. So I’m up for a drink, a meal, or a show (especially something I can watch passively), but I’m not sure I want to spend days just wandering around. 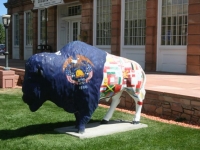