The Oakland Museum along Lake Merritt features an exhibit currently on the life and work of Charles and Ray Eames. Spinach and Giorgio kindly invited me along one Friday evening to the opening of the exhibit in two big museum rooms.

The Eames’s may be best known for chairs, but they designed much more: a video composed of thousands of slides to show Russians how Americans lived, stackable notched cards, coat racks, tops large enough to sit in, even plans for a national aquarium (never built). Over an era, the Eames were to go-to firm for any kind of design project, and everyone from the Federal government to IBM went to the Eames for ideas, films, prototypes, and production goods.

Charles urged, “look at everything as though for the first time.” The Eames collected reams of film slides depicting anything they found interesting. Their whole office was suffused with play, such as a tall xylophone built out of removable metal bars. Falling metal balls sequential played the notes. This xylophone, writ large with bowling balls, would make a great Burning Man piece.

The Eames, however, were as practical as fantastical. Charles recognized that project outlines were dictated by constraints, not just of time and cost, but also of materials, their properties, and the object’s use. I adhere to similar methodology when building my art pieces. What’s the largest size can I build? How can I waste the least material? What’s the lightest but strongest and cheapest frame I can build?

There’s some darkness in the Eames story. Ray met Charles as his student, a power dynamic we may question today. Charles passed away before Ray. On the day of his death, Ray just wrote Charles’s initials (CE) in her day planner and nothing else, a terse way to eulogize your life partner. 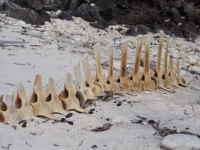