In 2005, I moved from The Netherlands back to live with my parents outside of Boston. I took a job, my first chemistry job, at Cambridge-based E-Ink. To get to work, I needed to buy a car. I tested some Honda’s and Toyota’s to pick instead a snazzy, 1-year old Mazda 3. Although the dealership offered a car loan, my Dad suggested we try the bank.

The bank offered a loan at ridiculously-high interest rates to which I lost my shit. We took the dealership’s loan instead. Later that day, I needed to open a bank account, so back we went to the bank and coincidentally back to the same smug bank teller. When she asked, “what kind of checks do you want?” I replied, “check checks.”

One week later a box of pastel Wizard of Oz bank checks showed up at my door – not just one book, but a whole box. For years, I embarrassingly paid rent or moved money around, signing just below Dorothy’s face or beside a monkey. I’ve only seen the movie once, as an adult, and I’m not a fan.

Life changes, I moved to San Francisco, I grew up (or down), and I’m more me than I was in my thirties. I still have one last book of these Wizard of Oz checks. I’ll start using them. In an ironic way, I quite like these Wiz checks, especially when faced with the alternative of “check checks.” 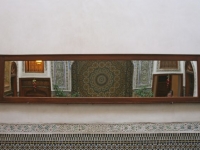