In Reno, first a woman outside a diner and later a guy in a gas station asked Greg and me, “How was Burning Man?” How did they know we went? Oh, the dirty car, the dusty clothes, the colored hair, and the weary mirthful expressions. I used to rail against such question of how was Burning Man. A quick response cheapens the intricate, long week of amazement, hardship, and miracles. I rather answer with a terse “Dusty” or “Hot.”

Every year is different at Burning Man and every year has its moments. Yesterday, I listed ten of my best moments out on the Playa. So how was Burning Man?

2014 had some of the best possible weather. Both days and nights were temperate early in the week, facilitating camp set-up. Monday morning’s rain may have devastated the unprepared, but our few tarps kept stuffs dry and the sun soon baked everything else. Daytime temperatures did rise to their usual hot later in the week. Evenings remained mild with coats at dawn.

Monday’s rain tamped down the dust for almost the whole week. Biking was quite good on flat soil. My bike’s kickstand worked this year. In previous years, the bike would ignominiously collapse. The final weekend did feature a few windstorms that ensured participants remembered the dust and would have to launder everything on return. We slogged and skied on bikes through blind dunes on Saturday night’s Deep Playa art tour. The 2 o’clock side of the city has much worse roads than the 10 o’clock side.

After weather, participants focus on the second most important piece of infrastructure: the Porta-Potties. There were never lines at the toilets unlike five year’s ago. The BM Org has solved the defecation density dilemma. The rain did deposit an unsightly layer of mud on the floor of each John. The toilets got worse – gag worthy – by the end of the week.

One year, the Org expanded the geographic size of the city, reducing the population density but generating empty dark swaths of streets. The current city density is about right. The intersections do clog with people during peak commute at sunset

About half of the art and art cars returned from previous years so there was a familiarity to the Playa. The largest art piece was “Embrace,” (or The Temple to Heteronormativity, as one camp member called it), a seven-story wooden sculpture of a man and woman’s head.

The Man lacked his usual structural base so no queues to enter but also no interest. People instead explored the surrounding souk stalls. The souk was well-intentioned (but not that interesting) for far-flung regional organizations, like China and Japan, to participate in Burning Man but not have to wheel in huge art.

David Best’s Temple shone magnificently in the shape of a stupa. The interior was smaller than usual and lacked upper stories. Sad people are still memorializing their cats, much to the dismay of those that lost parents, spouses, and friends.

The Police still troll in unlit SUVs. This year, I saw fewer cops on foot and never spotted an arrest. Either the Police were less active or I’ve learned to turn the other way. Participants have gotten more savvy at dealing with and avoiding law enforcement. The cat and mouse game continues.

The 2 o’clock and 10 o’clock edges had the standard large sound camps like Opulent Temple and Roots Society. Driving around in a large sheep with its own amazing DJ’s, I did not explore either edge much. The largest sound camp, White Ocean, looked abysmal with its glaring projection screen. Opulent Temple looked better, but still is massive and imaginative. Carl Cox built his own camp somewhere. 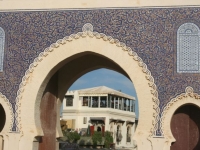