Toronto may be my most expensive stay. Sure, I plan to visit New York and Boston, but I will stay with friends and family. In Toronto, I slam money down at restaurants and museums. If I am not sure I will be back, I had better spend, spend, spend.

My two days in Toronto feel like two weeks. I open the weekend entertainment papers to recognize the names of many venues. I can quickly put my ear to the ground when I arrive in a new city to hear its tick.

Traveling alone is rather different than traveling with others. Alone, I am hyper-efficient. Coffee, meals, drinks are more gestures than activities. Select a place, slurp, done, next! My mission is not sustenance but scouting. Alone I assess – next time I will bring reinforcements. From a safe periphery, I spy on neighborhoods.

Traveling with others requires compromise and pacing, usually more leisurely than mine. Shared meals are for conversation more than just to fill the belly.

Thursday, I walked Toronto east-west from West Queen Street to the Distillery District. Friday, I travel the north-south axis.

I quaff a morning coffee in the familiar mall basement then snap photos of Toronto’s new city hall. Thomas Moore’s sculpture of the Archer still looks like a turd in zero gravity. Its purchase prompted civic uproar over whether cities should fix potholes or buy art.

The day blows blustery and cold, but remains free of rain. I march south until I run out of land at Lake Ontario. The CN Tower looms over downtown. Although warned of the tower’s expensive visit, I will not walk by the world’s tallest spire without going up.

I have been either smart or lucky over this trip to hit tourist spots during low or shoulder season. The tower lobby features a maze of red queuing barriers, but just ten of us stand in line to ride the elevator up the CN Tower. $36, ouch.

The view from atop is justifiably amazing and not vertiginous as the viewing deck is enclosed. I spot the southern Toronto Islands, the new city hall, yesterday’s art museum, and the brewery where I wish to lunch next. Beer! I am a Dudek after all.

One level below the viewing deck, I perambulate clockwise around the blustery outdoor viewing deck. Back inside, I look through a terrifying glass floor all the way down the side of the tower.

The tower ticket includes a twenty-minute 3D film that I thought would be about the CN Tower. Instead, the film explains flight, more specifically the design of Boeing’s 787. Yuck? As I had just visited Dayton’s impressive air museum, the film is synchronously marvelous. The film’s narrator, a Boeing engineer, ties together an albatross, the Wright Brother’s engines, carbon fiber technology, and the Airbus 380.

I lunch at the Amsterdam Brewery. Their beer improves on yesterday’s Mill Street offerings and the burger is quite good too. I ask the bartender about hockey, the subway system, bar closing times, and California.

After my beer flight, I drunkenly wander the lonely Harborfront. Few people are about, but the city prepares for spring. An aerialist practices hanging on red silks. A lonely captain shepherds sail boats and unwanted rental canoes.

The neighboring power plant has been converted into an art gallery. In a collection called Amnesiac Hide, British artist Mike Nelson sets up spaces abandoned by post-apocalyptic biker gangs. He welded together five air stream trailers and filled their low interiors with dilapidated mid-century modern furniture, foreign-language movie posters, and broken toys. In the upstairs gallery, he displays on a giant bookshelf the sad last possessions of his dead travelling buddy. On the reverse side of the bookshelf, Mike projects lonely Canadian travel photos.

I see art to jostle my brain. Which direction pulls? What should I build next?

Despite my travel experience, urbanity fills me with anxiety. Traffic! Systems! I feared the Toronto subway until I rode it north to the Annex district. $3. Easy. I should learn how to relax.

Dee-Ann recommended Toronto’s Bata Shoe Museum. There may be only one shoe museum in the world, so why not see it? The museum is well displayed but underwhelming. Museum visitors may flock to John Elton’s boots, Marilyn Monroe’s red shoes, and the Papal slippers, but I don’t appreciate women’s shoes, even if well-crafted. I did like the ethnographic shoes of Native Americans, Tibetans, Sami, and the Dutch (clogs!). I thought I would find sneakers as that’s what I wear. Alas, no sneakers for you.

I cut through the University of Toronto on the way home for a three-hour sit. I rise again at almost dark for a lonely ravioli dinner in a packed Bloor Street student restaurant. My table’s sole candle is too dim for reading the local papers, so I self-consciously drink expensive red wine and stare at happy couples.

Toronto, I have seen enough of you. I’ll be back. I don’t know when. 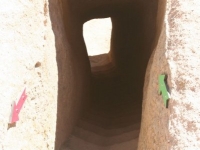