Even car travel can discombobulate. I wake Saturday morning in Toronto. I sleep Saturday night three hundred miles later, in rural Oneonta, New York. I swap a giant Canadian city for a US college town and the home of my professorial brother, his wife, and two kids. Oneonta has no 18-storey hotels with views of giant LED screens.

For this year off (on!), I reconnect with family. I spent two weeks with brother Ray in Yellow Springs, Ohio. I now spend three nights with brother John in upstate New York.

This is my fourth family visit on the road. All four families have two children. I commence the visit routine: park the car out of site of the house, put on stegosaurus costume, ring doorbell, roar! Something different has arrived. I have yet to encounter home dinosaur traps or stegosaurus fumigants.

John’s kids are Sasha, age 9, and Isabelle, age 7. I am related to them, but I see little of myself in them. I was a quiet, sullen, bookish kid, afraid of adults. These two girls are boisterous, inquisitive, and assertive.

A brotherly stay prompts a life I could have led. Would I exchange my day for his? Different–very different–but perhaps not better or worse. I’m an observer here, not a judger, fixer, or participant.

I play well with kids. I like toys more than most children like toys. No work, a year off, and no place I need to be, I can muster patience that was absent before.

For a few days, I integrate into family life. I watch John coach a kids Sunday soccer game. I walk with him to pick up his kids from the school bus stop. We grill dinner.

My brother wakes at 4am before chaos rises to get ready for his day with some dark alone time. At the other end of the day, his kids go to bed at nine and he at ten. When I lived in San Francisco, I was still out at the bars when he was waking up. When he was going to bed, I was still at work.

I visit John’s office at Hartwick College. I’d like to help him with his chemistry projects. I have seen so much science in my career.

We drop one kid at Girl Scouts. The two brothers escape for an early-evening drink at a dive bar. It feels early for a beer. As we leave the bar on a warm spring night, an older man rolls down his fancy car window to accost us with a yell and a wink. It is the Mayor. John is on the city planning commission. Like Ray, John knows everyone in his town. I hardly know my San Francisco neighbors.

The daughter invites the Girl Scouts back to the house to see the glowing dodecahedron. I pull light-up hats out of the car. We run around the basement until bedtime. 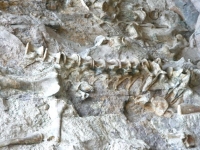