Facebook, the internet phenomenon I love to hate. So many waste so much time either posting pictures of their dinners or “liking” what others are eating. Through Facebook, new parents blast pictures of their new kid, the highschool classmates you wanted to avoid snoop back into your life, and drama queens fill the web with self-indulgent chatter. Friending – sadly now a codified verb – seems so frivolous and empty. Go outdoors and have a real conversation!

I held out from Facebook for so long with a pedantic sneer: Facebook is for other people, lonely people, vain people. However, many now use Facebook to organize upcoming events making it hard for me to learn times and locations without a Facebook profile. So I meekly signed up for a Facebook account but just to check information and lurk. Let’s keep it quick and clean.

Something changed recently to covert me into one of the Facebook masses. Like it or not (ha, ha), Facebook has become the vehicle for social niceties. If I cut myself off from social networking, I cut myself off from socializing. It still feels painfully trite to click that “like” button or respond with a “that’s too bad!” but that is me more accustomed to living in a cave.

Facebook also took over the need for chat rooms. A long time ago, you could chatter away on message board with people you had never met. It was easy but also empty and anonymous. At least with the chatter on the Facebook scroll, I am well-connected to my circles of Facebook friends. I do click refresh constantly for new posts like on an addictive Skinner box, but for content from people I care about.

Furthermore, I resisted Facebook for so long because I resisted exposing my own presence. What if those highschool classmates discover I am strange and exciting? Fuck ’em, is my new motto. I’ve got just one life to live and it’s about time to share it with those shut up in Worcester with new babies.

So I’ll be on Facebook posting pictures of my dinner, but hopefully dinner with drag queens. I’ll be clicking “like” and would love to hear from you. Do remind me to go outside to have a real conversation. 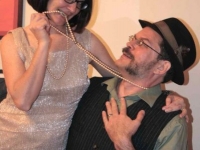