About six years ago at a San Francisco street fair, I spotted a guy who taped paper shark teeth to his hooded sweatshirt. Amused by the idea, I made a green dinosaur suit featuring a spine of white spikes illuminated by controllable LEDs. One dinosaur suit led successfully to the next: a brown hedgehog, a silver hat with white cones, an orange seahorse, and a purple ankylosaurus.

At about the same time, I built five spiked Platonic solids, each a different color. In a fit of madness – or inspiration, or perhaps both – I decided to make one dinosaur costume for each of the five Platonic solids, maybe a creature for each egg. So the purple ankylosaurus matched the purple octahedron while the orange seahorse paired with the orange dodecahedron. I have one last lonely Platonic solid: the rainbow-patterned tetrahedron lacks a dinosaur.

This spring, I built my last dinosaur costume, a rainbow triceratops. With rainbow as the color scheme, I used up fabric scraps so that every panel of the outfit is of a unique fabric. If I’m going to embrace chaos, I ought to make the LED cones similarly chaotic. From my starfish project, I had already cut-out cone forms of six different heights. When planning the rainbow dinosaur, I rolled a die to determine the size of each cone –or rather programmed a computer to do the randomization.

This is my last dinosaur outfit. Each outfit seems to take longer to build, I’m running out of ideas for the next outfit, and how many dinosaurs does a person need? With some sadness, I soldered together the lights for the last time and sewed the cones for the last time. The final rainbow dinosaur is brilliant – an anarchic, playful new direction for me. The variations in height make the cones look exceptionally spikey. I’m ready to curl up protectively to keep people away.

As my life has been filled with chapters – Stanford, the Netherlands, Texas – my creative life also has chapters. I never intended exclusively to build light-up dinosaur outfits, or even work just with LEDs. I’d like next to explore strip LEDs for small wearable objects like headpieces, but with the smaller size and greater power consumption of strip LEDs, I may never again make a full outfit like a dinosaur. I may return to writing, try kinetic sculptures, or make flame effects.

In the meantime, I’d like to explore this year as a rainbow dinosaur. There be a camping festival up north over Memorial Day weekend. My brother Ray arrives in June and he could be a hedgehog companion for an evening. Even Halloween comes again this autumn, and this city still needs a light-up rainbow dinosaur. 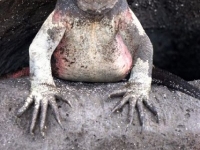